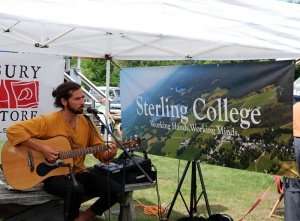 A little bit of folk, a little bit of rock ‘n’ roll and a little bit of blues & jazz – Fang Daisy is the newest musical reincarnate of singer/songwriter, Jax Hughes. For the last two years, Jax has been in Southern California and Cincinnati singing lead and playing guitar in the rock n roll 4-piece Mint Leopard. After recording a full-length album and playing a string of shows around the Midwest with that group, ML split ways and Jax went to live and work on farms.

As of January 2017, Jax is now living in Craftsbury Common, VT studying agro-ecology at Sterling College. He has the freedom there to explore the layers of memory and melody that have been lying in the folds of his heart. FANG DAISY IS THE MANIFESTATION OF THAT FREEDOM.