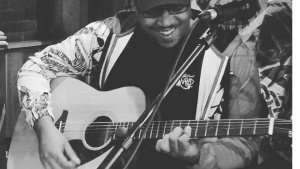 King Arthur Junior, originally from the southwest suburbs of Chicago now residing in Rutland, VT performs for the first time at the Craftsbury Farmers Market. A talented athlete he was recruited to play Division III college hockey at Castleton University. Influenced by the music of The Allman Brothers Band “Live At The Fillmore East” King Arthur performs his music in the genre of Dave Matthews, Hendrix, Clapton, Allman, and all of the Kings.